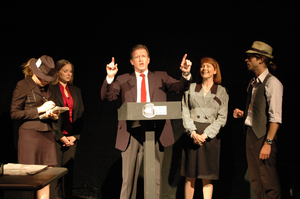 The Met Theatre in Hollywood, California is now showing the world premier of Samuel Warren Joseph’s CAMPAIGN: The Musical. A comic filled look at a modern day gubernatorial candidate in an unnamed state who is a pompous, arrogant, philandering, self-absorbed, individual who seems to stand for whatever will help him win, and against whatever might help is opponent win. Thankfully for him, his opponent is characterized as being just as much a reprobate as he is. Add to the mix a combination – whether intended or not – of modern day actual situations Californians find themselves in, and this production is unbelievably appropriate for our time.

While the show focuses on Steve Meyer, Campaign Manager for gubernatorial candidate Glenn Mann, played wonderfully by Travis Dixon, and Press Secretary Brenda Malloy, played very well by Jean Altadel, there are more than enough opportunities to see through the bologna of this modern day run for office. Candidate Glenn Mann, portrayed by Brian Byers will simply say whatever he has to say to whomever he has to say it to gain a position of office. This is not a practice that remains in his political career however, as he has difficulties with staying true to his seemingly only campaign platform, family values. Let’s just say that if the family values of Glenn Mann are the same family values that you hold dear, you deserve what you get! The candidates wife, Elaine Mann, brilliantly portrayed by Barbara Keegan, bring out a few other ‘stand by my man’ memories of Americas governmental debauchery, as well as the all too familiar factoid of the wife actually being the one with the passion for the position, regardless of what price she has to pay to have it.

Backed up by a brilliantly cast set of actors, as a play this production is all too realistic for most audiences to accept as ‘in your face’ reality. Thus, the playwright collaborated with Jon Detherage to make the production a musical. Add all the whimsical, nonsensical, over-the-top tom-foolery that one might be able to handle, and you have an ‘in your face’ reality production that you can laugh at. Let’s hope that those who view the production are intelligent enough to grasp the powerful message behind it.

As a musical, CAMPAIGN has something for everyone. Whether you enjoy Broadway show-tune style music, country, mild rock, calypso, or just plain down right hooky, this production has is all. Add to this some over-the top dance sequences that help you to lighten the power of the message and just have fun, and CAMPAIGN takes the stage by storm. Imagine the television show ‘The Office’ placed on stage, set to music, and focused on a gubernatorial campaign, and you have Joseph’s production. Add lyrics that are easy to listen to but send a megaphone sized message – “Freedom is a myth to torment the soul”, “Lying convincingly is an art form”, “If your gonna win, you need the proper spin” – and the power of Joseph and Detherages’ work is actually quite overwhelming. Sneak in a few lines that help the audience question their own moral compass like, “Why would a woman have an affair with a married man and then expect him to be loyal to her” or “A man can never lose himself as long as he has his dreams”, and the powerful country song that will likely hit the country pop charts tomorrow – “You’re not man enough to be my man” – and the massive intelligence of the message is one that deserves a Pulitzer. The show as a whole may never see that kind of accolade, but I must say hats off to the writers who brought it to life.